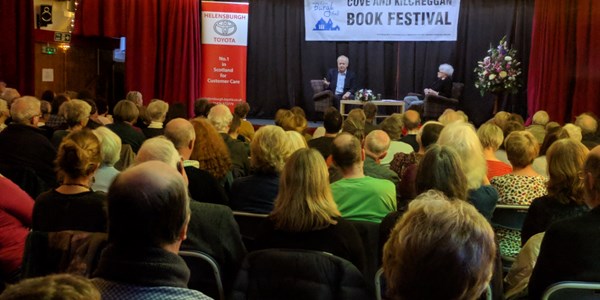 This year’s 9th annual Cove and Kilcreggan Book Festival will be held over the weekend of the 26th and 27th November in Cove Burgh Hall.

It opens with Angus Roxburgh whose book on Putin has been updated to encompass recent events. Next up is a double act – Rosemary Goring and Clare Hunter have both written very different books about Mary Queen of Scots.

After lunch, Deacon Blue’s Ricky Ross will be interviewed about his new memoir by the BBC’s arts correspondent Pauline McLean.

After Ricky we’ll hear from local crime writer Denzil Meryck who will be in conversation with fellow writer Doug Skelton with whom he also shares a podcast.

Sunday opens with novelist Chris Brookmyre and his consultant anaesthetist wife Marisa Haetzman, who write under Ambrose Parry. A Corruption of Blood is their third novel.

They will be chaired by Radio Scotland favourite Janice Forsyth who is also on parade for the following guest Mollie Hughes. Apart from going up Everest and off to the South Pole, Mollie’s new book is about Scotland’s water and its attraction for sailors, kayakers paddle boarders and every other form of water sport.

After lunch the legendary environmental writer Jim Crumley is chaired by broadcaster Sally Magnusson, and the festival closes with foreign correspondent, photographer and documentary maker David Pratt who will screen excepts from his Iraq, Ukraine, and Balkans films.

Weekend passes on sale later this month: look out for the announcement on the Cove Burgh Hall Website.