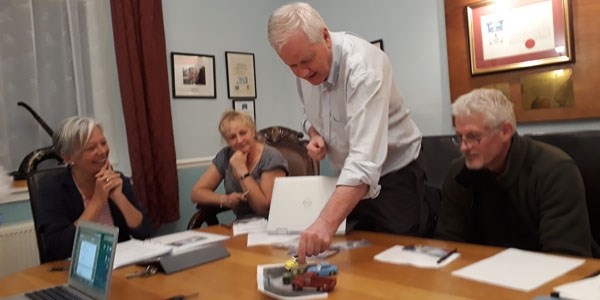 At a recent Board Meeting, in his role as leader of fundraising he adopted a playful, non-traditional approach to sharing his insight to the how best to drive forward the momentum gained through funding of the current project (Facade Project - Phase 1) - emphasising that ‘momentum is a charity’s best friend’.

In his ’toy box’ were four brightly coloured cars, and a highway mat with four lanes.  He explained the benefits of ‘hitching a lift’ with each car with their variable volume of funding, time lag in application/approval, and purposes e.g. heritage conservation, facilities enhancement, general upgrades.

As you can see from the photo, Graham’s ‘gear shift’ worked a treat, capturing imagination, engagement, and enthusiasm!