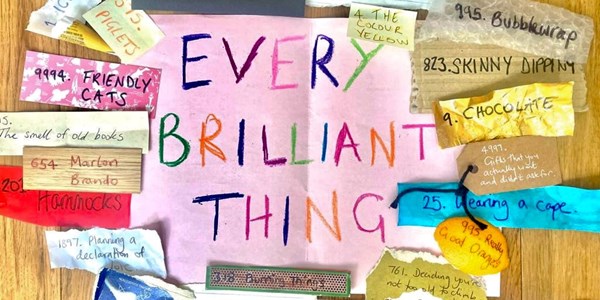 The Mull Theatre Company, with a shiny new artistic director, is touring Every Brilliant Thing round Scotland in November, and it’s coming to Cove Burgh Hall on the 20th.

Although billed as a solo show with just one actor, some of the audience will find out they’re also about to test their thespian skills.  But not to panic – they only have to read out a line or two.

Written by Duncan MacMillan, you wouldn’t think that a play featuring a child coping with a parent’s depression would be much to laugh about.  But as the Guardian critic Lyn Gardner noted “it’s one of the funniest things you’ll ever see.’

In fact it’s one of those rare piece of theatre which has you guffawing and greetin’ at the same time.