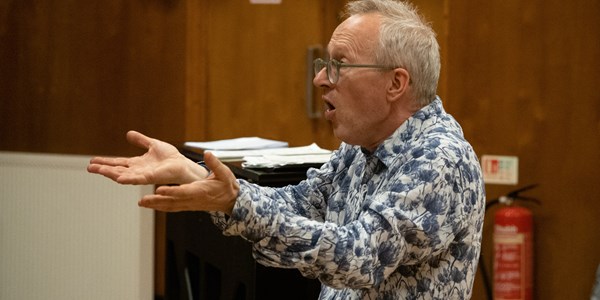 Christmas with Strings is our Christmas concert.  For the first time in a long while, the Peninsula Choir is decamping from its usual concert venue in Cove Burgh Hall with its beautifully restored façade, and is occupying Craigrownie Church up the hill for our annual Christmas event.  The principal reason for the change of venue is that Stephen Adam our fantastic musical director was convinced he did not have enough preoccupations with vocal and piano issues, and has added a group of string players - ten strong - to join with us in Christmas fun.  As we now approach the number of performers which seeks to exceed the number of audience members - it was time to move to an even larger venue.

The String players include leader of Scottish Opera Orchestra Tony Moffat from Helensburgh, and a host of other violins, violas, cello and double bass.

The concert is an exciting one, with plenty of wintry content from Elgar's The Snow to Christmas In Kilcreggan, and a Nativity celebration of the highest order with Unto Us A Child Is Born by Handel.

Some of the carols are unusual and have taken some learning - The Monkey's Carol by Stanford and Bethlehem Down by Warlock and Blunt have seen a challenging number of practice sessions, but they are special and have merited the attention given to them both by arrangement from Stephen and by practice time amongst the choristers.

Will we have actual snow to make it all the more festive?  We are hoping not as the trek up the hill will be arduous in bad weather and we hope to bring enough seasonal sparkle without the added touch of frost.

All audience members are asked to park at Cove Burgh Hall from where a free taxi service will be operated to transport everyone uphill to Craigrownie, and down again after the concert.

We hope to see as many as possible of our local fans there.  Tickets from Cove Post office: £10 (a complementary glass of fizz is included with the ticket). Concert doors (Craigrownie Church) open at 7.30 for an 8.00 start.